This blog post title seems to be an oxymoron at first glance. “Publish” means “Prepare and issue for public (…) distribution or readership“. Private means “for the use of one particular person or group of people only”. And that’s exactly what I want to do: I want to publish a self-hosted web service on the public web, but for my own needs only. By that, I mean that I want to publish a web service on a given URL, but block it from wide open public access. A sane individual would say: just put it in a VPN, so it’s in no way accessible from the public internet, but where’s the fun of it? 😄

Sure, I really do have a VPN for some services that don’t belong on the Internet (Think SSH, file transfer, etc). But what about xBrowserSync, or Bitwarden? Having that completely accessible on the Internet is a gamble I don’t want to risk: you’re at the mercy from the software developer and container publisher, and I certainly don’t want data leaks.

So I managed to achive a middle ground of actually having web services accessible from the public internet on a public URL, whitelisting certain IPs and keeping it blocked altogether from the rest of the world. I can even open up access on a per-IP basis by logging in from a specific URL (Although warning: it’s considered security by obscurity and is a Bad Thing™) for temporary remote access.

Skills required to follow: Many skills needed! You need to know how to manage a Docker host with containers running, configure a web server to use these Docker container, configure a reverse proxy web server, and a bit of NodeJS programming and Bash scripting for the extra step.

For the impatient: TLDR summary

I personally dislike the new trend with blog posts on a technical subject beating around the bush, explaining what is a Docker, what are ports, when did Apache release httpd v1.3 and explaining the whole universe from the big bang up to nowadays before getting to the real meat of the subject. So if you are in a hurry or want to read fast, here is the gist of the tactic I used to blocking public access to my web services. Skip to the next section of this article if you are ready to get the details of every script, service or config. Also, you’re welcome!

I created a little graph to help visualize the whole process. There are two entry points in this graph, one for the service you want to protect, in green (I used Nextcloud as an example), and the other as your way to allow yourself external access when you are NOT in the allowed IP list, in yellow. 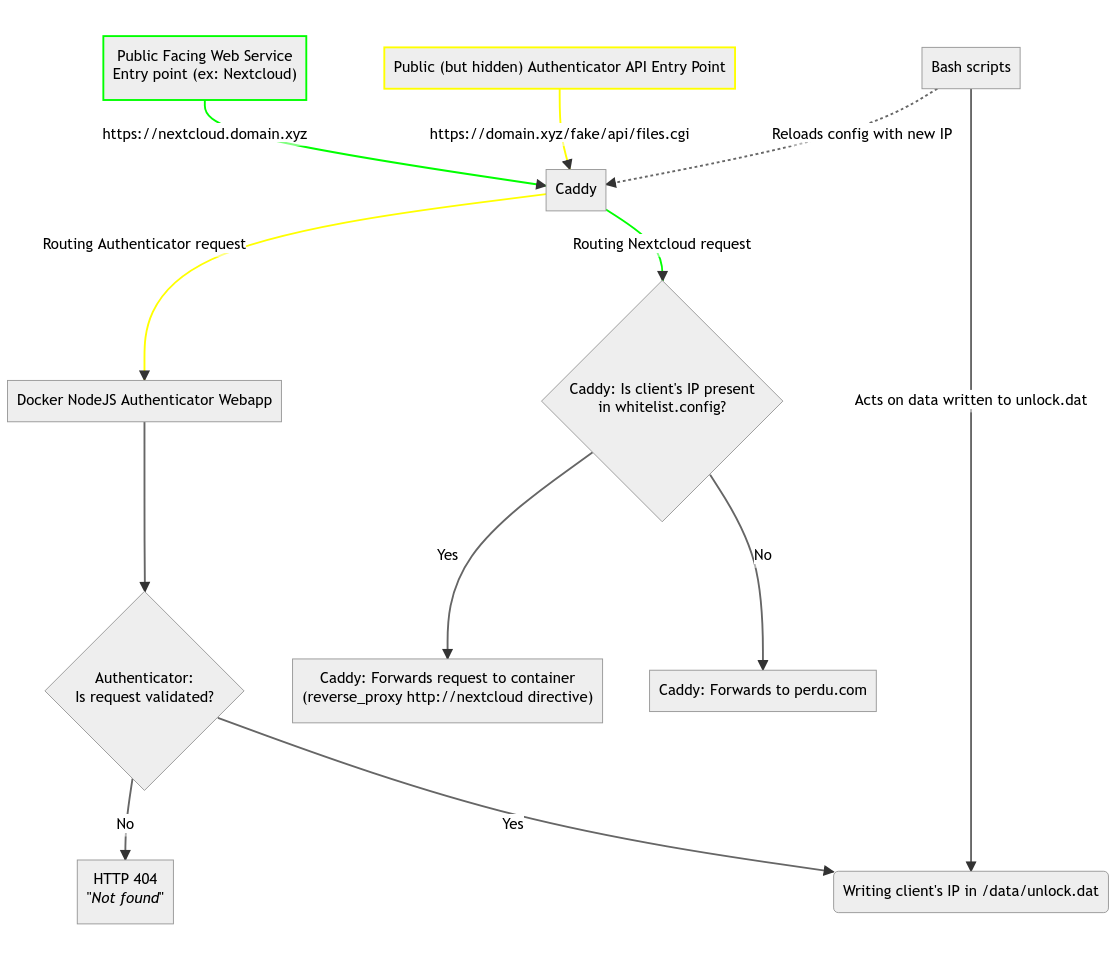 For every host or URL that you want to protect, add a line import whitelist.config in it’s configuration block. This will import a file called whitelist.config in the same directory as your Caddyfile by default. Yours can be different, but you have to make sure to change the add-ip.sh script (shown later) to reflect the correct file path.

(Note: Configuring Caddy (or any web server for that matter) is beyond the scope of this document, but the general idea applicable to any web server is to have a second, seperate piece of config that you want to import and use for every domain or URL you want to protect, as the second config has the directive to block the bad actors)

Here is my complete whitelist.config file:

This config defines this:

Anyone not affected by the redirect is actually a known IP which is fine to let through.

Changes to caddy may be live-reloaded with the command caddy reload --config /path/to/your/Caddyfile.

The extra mile - allowing anybody on demand (advanced)

While the above will work for static or previously known IPs, there is however a missing piece of the puzzle: when you’re on the go on your cellphone, or at home with an ISP that gives you a dynamic (read: always changing) IP, you may want to access your private web services on an remote server (for example a Nextcloud instance you’re afraid to let accessible over the public internet). What I have used in the last year is a variation of the following steps.

I have obviously changed the exact details for security reasons, but this also shows the point that you can use whatever method of authenticating yourself by altering the configuration below to your liking.

(Sidenote: The word Knocker here is a reference to Port Knocking, where you have to connect to a very specific set of ports, in order, to trigger a script that opens up the server for you. )

I use a very simple NodeJS container that does this tasks:

Here is how my Caddy server is configured to pass-through requests to that NodeJS container:

Using a fake but seemingly valid API tactic, we could install our NodeJS listener on this endpoint in the Caddy configuration:

Whatever fake API endpoint you use (or you could use your own fake custom path like bilange.ca/api/files.cgi for example), you need to reflect that in BOTH the code of the NodeJS App and in your reverse proxy configuration, both HAS to be identical for requests to be handled correctly by the NodeJS app.

The NodeJS app source code generally looks like this, but may need some fine-tuning on your end. What is listed below is the complete source code. Check the comments scattered throughout the code to understand how it work and how to improve over it. Warning: some lines are longer than the code block, but you should be able to copy/paste and/or scroll to see the longer lines.

This is the main NodeJS application, it’s listening on port 80 because it sits alone in a Docker container in my setup, but if you choose to go the other way straight on the host, you may need to bind to a higher port.

The NodeJS Docker container is setup with this file and directory structure (and every file listed will be printed out below as well):

This file is required to build a custom made Docker image from scratch. It is indirectly called by the docker-compose file I use in my setup

Here’s the part responsible of launching an instance of this NodeJS container:

However you decide to setup your container, it’s required to create a volume for the /data subfolder in the container. This should be a subfolder of where all the files listed above resides on disk. Mounting /data is vital, as the NodeJS app will write successful authentifications to the file /data/unlock.dat which will be read by the following shell scripts below, which are running outside of the container.

This script (and add-ip.sh) acts as the bridge between the container’s data/unlock.dat and Caddy: it needs to be running at all times and will act immediately on changes detected in unlock.dat. When changes are detected, it will actually launch an instance of add-ip.sh in the background with the client’s IP as a parameter, read from data/unlock.dat, so it can return immediately in a “waiting” state for the next time NodeJS writes an IP into that file.

This Bash script does the heavy work of keeping a list of allowed IPs and remove them from the list as they expire 24h later. It also regenerate the Caddy’s whitelist.config as the IP list changes, and live-reloads Caddy when the config has changed.

My recommendation is to protect services that contains sensitive content, like a file manager or a password manager, behind this whitelist tactic presented here. Obviously, this will be impossible to do on services that rely on peer to peer for it to work, like Mastodon or federated Nextcloud instances.

I hope this will be useful to somebody! My goal in publishing that is to give selfhosters a bit of confidence in publishing their web service of choice, without having to fear getting their server or service breached. Also, the more tech-savvy people self-hosts, the less people will depend on third-party which they have less control on.